The Sacred of Burma or Burmese cat

The Birmans cats or also called Sacred of Birman is a cat with mysterious origins. Some say it originated in Asia, where wonderful stories of cats living in temples come from, while others believe it owes its existence to crosses concocted by French breeders. This feline of French origin is probably the cross between a Persian and a Siamese.

In the North East of Burma (now Myanmar), near the Chinese border, lived a monastic congregation, the “Kittahs” renowned for its wisdom and faith in the great God Song Hio, and the sapphire-eyed goddess Tsun Kyan- Kse.

Among these monks, one of them Mun Ha was particularly respected. Beside him lived Sinh, a cat with golden yellow eyes and whose ears, nose and the ends of the paws were
of the color of the ground, as if to symbolize the impurity of all that touches the ground, and in the monastery, all the monks had a cat.

Mun Ha, very old, very tired, had decided to await death kneeling and in prayer, in front of the goddess Tsyn Kyan-Kse. Sinh the cat, following the example of his master, refused all food, refused all drinks. One evening Mun Ha passed away much to the despair of all the Kittahs gathered around the old monk. Suddenly, Sinh the cat, with a jump perched on the head of his sagging master, his master who for the first time had ceased to fix the eyes of the goddess Tsun Kyan-Ksé, Sinh froze in front of the statue, in a hieratic position, at this moment, her hair turned golden yellow, just like the golden body of the goddess, her golden yellow eyes became blue and deep, like the azure eyes of the goddess Tsun Kyan-Ksé

Sinh died seven days later, in the same pose he had assumed at the time of his master’s death, facing the goddess, his eyes in her eyes, carrying the soul of her
worshiped master towards Tsun Kyan-Ksé.

A few days later, the priests assembled to elect Mun Ha’s successor, saw the 100 cats from the Temple come running. All without exception, were dressed in gold, gloved in white, their yellow eyes had taken on a sapphire color, the same color as those of the goddess. 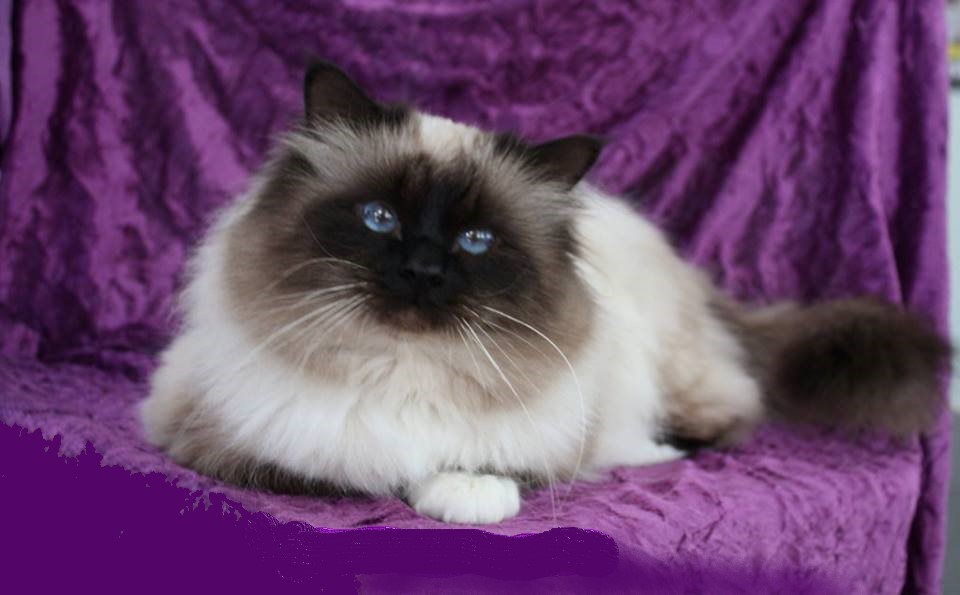 It is more likely that the Sacred of Birman, of French origin, was the result of a marriage of a Persian and a white-gloved Siamese. Its existence appears in the twentieth century and the first Burmese is present in feline exhibition in 1926, this subject is Seal Point color. Unfortunately, few Birman  survived the war. In 1957 another color of the sacred of Birman appeared, Bleu Point, during a French cat show.

The Sacred Birman or Birman cat has a very harmonious look, a majestic attitude with a very silky, satin and dense mid-length coat. Its maintenance requires brushing per week and every day during the moulting period in spring, grooming absolutely not binding.

His Color point colors are very attractive, a nice contrast between his mask and his Color point fur, and the darkest possible blue of his eyes. He is also very specific with his white gloves on all 4 legs and, the particularity of this breed requires spurs on the hind legs which go up in a V-shaped point. 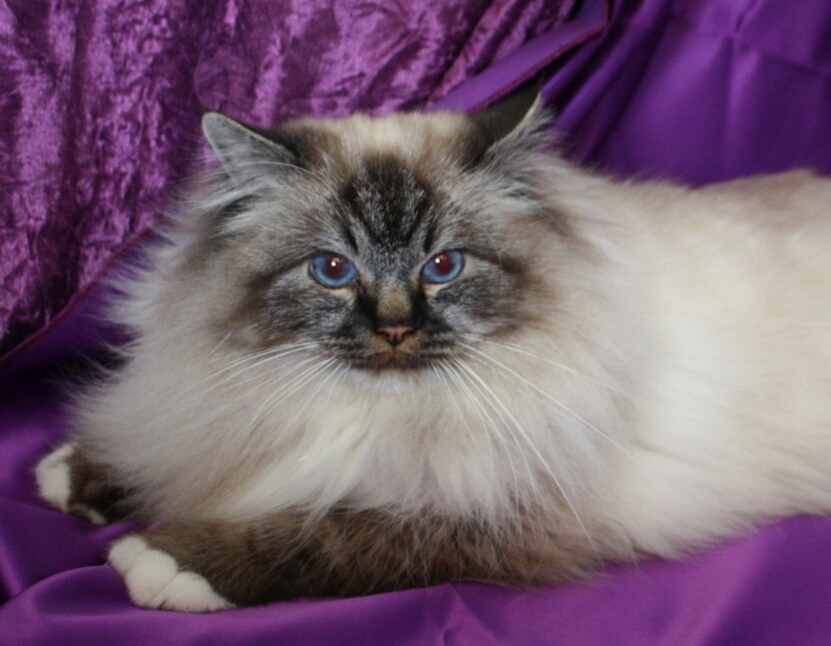 The Sacred of Birman establishes a very affectionate and faithful relationship with his master, he follows him everywhere. He is a playful cat to an advanced age.
He is very easy going and socializes very quickly with his peers, he is a model of kindness and affection. The Sacred of Birman has exquisite manners and very distinguished attitudes, an elegant cat par excellence.

He is a calm, balanced, neither passive nor exuberant cat with a harmonious voice who knows how to make himself understood very well.